In the final episode of our first series, we look at the Geezer Butler Bass Rig. One of the most influencing musicians of all Metal genres. Geezer can be named the forefather of all things heavy in his own right, developing his own sound and accompanied writing. Drawing heavily upon his fascination with the darker side of the human condition, religion, horror, sci-fi and nuclear Armageddon. Geezer Butlers Bass Rig at present has consists of Lakland Basses and Ashdown Amplifiers but there is plenty more to his sound than that.

Geezer’s career spans over 50 years and is known primarily for his work in Black Sabbath and again with the related band Heaven & Hell.

Basses in the early days of Black Sabbath

Geezer recorded the first four classic albums Black Sabbath, Paranoid, Master of Reality and Vol. 4  all with the same bass.

The paint from the bass was striped off leaving the bare wood finishing showing.

This bass was seen in the early videos of Black Sabbath such as the Beat Club videos and the Paris live show from the 1970’s.

During the tour of Volume 4, Geezer is often seen with a Plexiglass bass made by Dan Armstrong at Ampeg amplifiers. He’s said in interviews that his Precision bass was “smashed to pieces with a hammer” … somewhere between Detroit and Toronto.

This event took place on a Sunday where most shops are shut and at the recommendation of the music promoter found this bass in the only shop that was open nearby. This bass was stolen at the end of the tour in 1973.

Located in Birmingham, John Birch created guitars for both Geezer and Tony. It was Geezer who first had the crucifix custom inlays that Tony is now known for.

Geezer had three custom Birch basses made in the early 70’s. These basses have been mistaken for the Gibson SG series as the Birch workshop modifies and creates similar looking basses.

These basses were modeled after the Gibson EB series, with softer horns and similar pickups that were interchangeable. In addition to this, the neck scale was shorter (30.5″ scale) than the usual Fender basses (34″ scale) at the time. This scale length was essential for drop tuning the bass down to C and C# tuning where there was less tension on the strings.

Seen in the live tour pictures for Vol.4 and the Cal Jam Festival 1974.

From 1975 onwards Geezer used basses created by John Birch’s co worker John Diggins. Diggins’ basses have a distinct soft V shape in the headstock and are branded Jaydee basses to separate himself from the Birch workshop.

A Jaydee Roadie 2 was created for Geezer and used to record the albums “Sabotage”, “Technical Ecstasy” and “Never Say Die”.

You can spot a JD bass by the bridge tailpiece which is coin shaped and has slots for two strings. The Birch basses in comparison are rectangular.

During a live video performance during the “Never Say Die” tour in London.Geezer was seen playing a red Rickenbacker. This bass was used for this gig only as he forgot to bring his JD basses.

Geezer bought it as a collector’s piece, originally owned by Glenn Hughes and used in Deep Purple. The “Never Say Die” tour was the last before Ozzy Osbourne’s departure from the band in 1978.

Whilst not mentioned in the video, these basses have been spotted during the Dio era (1979-1992).

Geezer was endorsed by BC Rich and had;

Geezer discussed his  bass rig during this time in an interview with Bass Player Magazine Geezer Butler: Diamond Geezer

The amplifiers for this period can be found in Geezer Butlers Amplifier Rig.

Black Sabbath reunited in 1997 and performed alongside Ozzy Osbourne at Ozzfest where his bass rig consisted of;

Geezer was using Vigier basses throughout the 90’s recording his solo albums. This continued well up to the early 2000’s with the Black Sabbath reunion tours. Seen on TV appearances and the tour at the time were

All three Vigier bases had 24 medium frets with a Phenowood fingerboard and 33.8″ scale. the pickups were Vigier made with an active 3-band EQ. Geezer has stated in an interview with Vintage Guitar Magazine (2007)

I couldn’t use them (Vigier basses) in the studio because they were active, and so powerful.

I was trying to get away from the active thing, and my Lakland’s passive. It has a pure sound, what I’d call a nice old growl.”

He also states in this interview he was introduced to Lakland basses around the year 2000, prior to Ozzfest.

Geezer was first seen with a Lakland bass around 2005 at Ozzfest and Download Festival in the UK. Playing with a stock Joe Osborn Lakland and his own customised basses during the “Tortoise era.”

See our free downloadable guide for pictures (See below).

The Joe Osborn signatures have a distinct Concentric Stacked Knobs making it appear button like. Normal Jazz basses do not have this option.

All three are seen on tour during 2005, see UK’s Download Festival.

In 2006, Geezer, Tony and Dio regrouped under the name Heaven & Hell to differentiate themselves from Black Sabbath. For these shows Geezer had the same basses mentioned above but with a colour change. This era was called “The Grey era”. 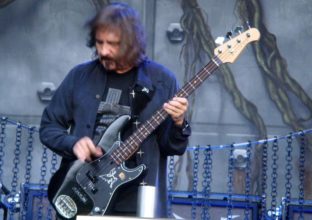 This same equipment was used through Masters of Metal tour with Judas Priest in 2008.

After Dio’s death, Geezer was seen at the Ronnie James Dio tribute gig in 2010 with;

The Artist series BB was relaunched by Yamaha  and sought well known musicians for endorsements. Geezer, Flea, Duff Mckagan, Glenn Hughes and Exodus bass player Jack Gibson were some who were seen.

In 2005 and  2007 Geezer had two photo shoots sporting two different Lakland’s. These shoots were for a bass player magazine.

During the interview segments of Classic Albums:Black Sabbath – Paranoid , Geezer was holding;

Black Sabbath reunited in 2011 after the death of Ronnie James Dio and the dissolution of Heaven and Hell. In this period from 2011-2013 Sabbath recorded “13”. Lakland co-designed Geezer’s very first signature bass in Precision and Precision Jazz versions.

For the “13” tour, Geezer took “eight or nine” basses in all. Three main, three backups, one for the dressing room and one spare.

His main basses are all signature models which are almost identical.

In footage from “The End” clips show Geezer Bass Rig with

Recording the “13” album, Geezer used a mixture of the Laklands and a Bill Nash Custom

This is Lakland’s tribute to Fender’s 60th anniversary 1951 Precision reissue which was also put to market at the same time (causing some controversy).

Continuing with the “13” tour, Black Sabbath played Abu Dhabi in 2014 where Geezer had;

The farewell tour to Black Sabbath played 41 shows throughout the world. Geezer was gifted a custom bass from his bass technician Terry Welty

Seen during the show finale Paranoid

As there are so many Laklands mentioned in different configurations and varieties we would like to give you FREE downloadable picture guide.

This has been the final artist in our first season but don’t worry. Part two of Geezer Butlers Bass Rig is coming up with a second video soon to follow. An update to the YouTube channel will be posted shortly where more news will be revealed about season 2.

Have you seen our previous episode? In the last Know Your Bass Player we took a look at the Jason Newsted Bass Rig during his stay in Metallica.