Welcome back, It’s part 2 of Les Claypool’s Amplifier and Effects Rig. Les’ amplifier rig is a little bit of a mystery. While he endorsed both Mesa Boogie and Ampeg over the years, it seems he was never satisfied with his rig. Swapping amplifiers and cabinets, in and out more than any other bass player covered on the channel.

Primus Amplifier and Effects on Suck on This (1989)

The earliest we see of Les Claypool’s amplifier and effects rig is a single 15 inch cabinet with an 8 inch high frequency driver Made by Electro Voice. The head on top of this cab is believed to be an SWR SM 400S which Les owned around this period.

This was used in the live sessions for KZSU radio in Stanford California 1989 and live shows at this time.

One year later following the success of the live album “Suck on This”. Les is photographed at a show at the Haight-Ashbury Street Fair. In this photo Les has now switched to Mesa Boogie with a rig now of;

Also in his rack is an ADA MP-1 preamp with the MC1 controller. This configuration will become the core of Les’ bass rig.

Amplifiers on Sailing the Seas of Cheese tour (1992)

In the summer of 1992 we see a slight change to the rig. With Les now using Ampeg equipment.

A month later in an interview taken from Guitar Player, August 1991. Les mentions he uses a Mesa rig and nothing about Ampeg. This is reflected in the debut music video “Jerry Was a Race Car Driver” as we see his core Boogie rig.

In 1992 and we see some experimentation. Primus were touring early that year and shows from this period give us the introduction of a 4×10 SWR cabinet with a Boogie 15 underneath.

On stage this time was a Gallien Krueger 800RB head and now two SWR 4x10s. Mentioned in an interview at the time Les stated

Amplifiers and effects on Pork Soda (1993)

Pork Soda* was released in 1993 and in the video D.M.V we see the Mesa Boogie rig back onstage.

Les now also has a second ADA preamp which he declared a backup.

Primus again moving into the mainstream show up on an MTV Halloween Special in 1993. This time Les has two Mesa Boogie PH1000’s A year later, they were dropped in favour of the core rig, returning in Woodstock 1994.

Moving into the height of Primus’ cultural peak came “Tales From the Punch Bowl*” (1995). With the first video being “Wynona’s Big Brown Beaver”.

A portable amplifier was seen in this video made by Ampeg.

The Punch Bowl tour sees Les return back to the core rig and using either 1 or 2 Boogie 15 inch cabinets.

The Punchbowl era sees Primus appearing on prime time television programs. With performances on Conan O’Brien and the David Letterman show in 1995. A second appearance on Conan came in 1997 and Les used the same gear.

Amplifiers and effects on the Brown Album (1997)

Les mentions in an interview in 1997.

His amp? A small solid-state Gallien-Krueger …

“For me,” says Les, “it’s easier to get tones out of smaller, quieter amps, because you’re not feeling the big sound in the room, but just hearing what the mike hears. The mike can’t feel the rumble that you feel through the ground.

In footage from this video a PH1000s returns and is seen offstage.

Around this time on a German TV special, Les makes an appearance with a set of Ampeg equipment

Recording Antipop with no amplifiers (1999)

According to Les in an interview at the time .

To record most of AntiPop … Les recorded direct with no miked-amp tracks.
For most songs he plugged into his trusty ADA MP-2 guitar preamp (not the same model as the MB-1 bass preamp he shilled for years in the now-defunct company’s ads).

A rackmount Lexicon MPX G2 multi-effect served as both preamp and delay. In certain places he also used an MXR Phase Shifter, Larry Lalonde’s vintage Mu-Tron, and “a Korg envelope follower of some sort [AX300B].

Amplifiers and effects at Ozzfest (1999)

Primus toured Antipop at Ozzfest in 1999 and it’s here we have one of the clearest pictures of Les’ rig at this time.

Seen at a show that October 1999 it would seem that Les tries different Ampeg equipment again, using.

If you’re not familiar with these, you’ll find that cosmetic changes were brought in about the early ’80s. This is due to Ampeg being purchased by Japanese firm, MTI (Music Technology, Inc). Therefore this is known as the Ampeg MTI era.

Above the SVTs are what looks like two Gallien Krueger 800RBs but there is no information why they would be there.

Les amplifiers and effects in Oysterhead (2000)

Primus went on hiatus in 2000 and Les created supergroup Oysterhead. For this group a new rig was used.

These PR cabs have high frequency drivers in them, enhancing their high end.

The ADA preamps and delay was completely removed from the rig. Les now relies on effects pedals to do the same job. 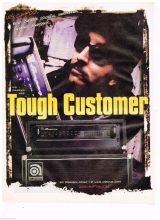 Throughout Oysterhead, Les keeps the same cabinets but cycles through amplifiers.

He’s seen throughout this period using an original SVT, SVT2’s, SVT3’s, SVT4’s and SVT5’s. With no particular reason for changing so frequently.
.
Les officially endorsed the SVT3 PRO (blue stripe model) in the 90’s. As well as the normal SVT-3 and 4 on the Ampeg site from 2013.

This modern Ampeg rig was used throughout the mid 2000’s and was also used in further side projects such as Colonel Les Claypool’s Fearless Flying Frog Brigade,  Bucket of Bernie Brains and Primus in 2003. Swapping the heads out as he saw fit.

There was some deviation in 2006 with some Ampeg 8x10s being reintroduced. Inevitably, these cabs were used on an off right up until 2015.

To make things even more confusing, Les never settled with the 8×10’s. Sometimes he went back to PR cabs or tried the newest SVT Neo cabs at the time.

Having spoken highly about his experience with an API console in the past, It’s clear Les wanted to recreate this on stage.

I bought this old API console, which is phenomenal

The Many Colors of Les Claypool – Bass Player Magazine 2017

The equipment here was kept the same until 2015 which brings us to the current Claypool amplifier rig.

Seen in Claypool Lennon Delirium and recent Primus shows in 2018. Les returns to his former glory with a Mesa Boogie Endorsement. Using Subway D-800 Heads and up to four Subway ultra light 12’s.

Les has said on more than one occasion he isn’t much of a gear head.

I’m not a big gear head. I’ve just accumulated things over the years …

Les Claypool and the ADA preamp

For much of the early Primus catalog you’ll find the MP1 and the MP2 which are responsible for much of Les’ sounds.

I use only about nine sounds on it, just to cut treble, cut bass, or add a little crunch.” an identical MP-1 sits in his rack as a spare. Programs are selected with a MIDI Ground Control footpedal made by Digital Music.”

Les often paired this with the MC-1 MIDI foot controller and later on a upgraded this to a controller made by Digital Music.

The MP2 replaced the MP1 around 1995, adding more functionality but essentially performing identically.
The MP2 preamp was used to record Antipop. In addition, a short list of gear was added to the production.

On stage with Oysterhead from the year 2000. The foundations of Les’ pedal board was starting to take shape. The ADA preamps were removed in favour of well known effects pedals.

The main layout of this pedal board is in three panels and essentially boils down to a midi section, distortion and then modulation.

These boards are split up using various A/B and ABY switchers. This can give access to one board at at time or make combinations of everything in between.

Effects on the midi pedal board (far right) 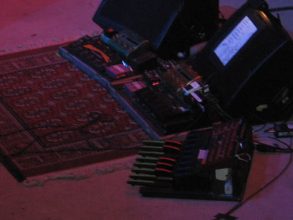 On the midi board starting far right

Effects on the distortion board (middle panel)

The distortion board at one point had; 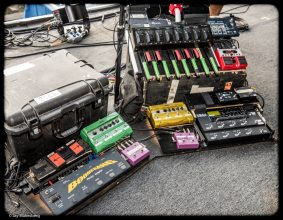 Les was in admiration of Treys boomerang and decided he wanted one too. Stating “The original version has a lo-fi quality.

By 2017 we finally get some answers from Les’ bass tech Ryan Becker who provides some clarity.

These go in the effect loop of a Fractal Audio Systems AX8 Amp Modeler + Multi FX, which sends a signal to the house. “

The tech also commented on the recording of Desaturating Seven*, stating.

Les has used EMG pickups since the very first Carl Thompson bass back in 1989.
Primarily he has always used an EMG ceramic humbucker on every bass, including the resonator bass.

Les endorsed by them today and uses the following models.

The earliest mention of what strings Les use was in a 1992 interview which stated;

Les Claypool gets a Taste of the Big Time 1992

By 2006 Les changes from Dean Markley Nickels to the Blue Steel strings and then from 2011 right up to current day. Les uses Dunlop custom strings.

There is no information about what the gauge Les is currently using. It is likely to be a similar gauge to the 40’s to 100  used in the past 15 years.

After the Les Claypool Bass Rig series we are taking a look at Lemmy from Motorhead. If there’s a bassist you want to see, then get in touch!